Favorite recent and insightful quote I have read recently:

Favorite quote I have recently read: "The word temple comes from the Latin templum, which signifies an extended open space that has been marked out for the observation of the sky. In what manner is such a space marked out? According to Dr. Hugh Nibley, the word templum, "designates a building specifically designed for interpreting signs in the heavens--a sort of observatory where one gets one's bearings on the universe." The root "tem-" in Greek and Latin denotes a "cutting" or intersection of two lines at right angles, the point where the "cardo" and "decumanus" cross, hence where the four regions come together." Matthew Brown - "The Gate of Heaven"

What if the Inca had Conquered Europe?

Last week on our day off we visited an ancient pre-ceramic site called Bandurria. It is part of the Caral Supe complex of ruins of the Norte Chico civilization along the north coast of Peru. These are among the oldest urban centers in the world and compete with another site further north as the very oldest in the Americas.  The pyramids at Bandurria and the older community at Aspero predate the construction of the Great Pyramid of the Egyptians at Giza by five hundred and one thousand years respectively. To date the competition of radiocarbon dating has put the ceremonial center near Casma Peru, called Sechin Bajo as the very oldest. We also have visited that site, though there is very little to see since the work is only recently underway.  One of the scholars investigating Sechin Bajo observed the construction was done by a people who had a "very good knowledge of architecture and construction." That suggests to me there are older sites that have not yet been uncovered, investigated, and carbon dated. The Norte Chico Civilization, dating to approximately 9500 BCE, is the very oldest of Peru. Likely, older sites will be discovered and forthcoming as funding becomes available.

Most scholars believe that following the retreat of the last ice age some 15,000 years ago the coast of present day Peru became inhabited by neolithic peoples migrating over the Andes from the Amazon. These seacoast locations allowed for sufficient caloric intake from the rich waters of the Pacific to allow for community development and cooperation giving rise to these earliest centers of worship and urban organization. Bandurria is one of approximately thirty such sites of the Norte Chico civilization though they reached their height and flourished 3,000 to 1800 BCE.
Our guide suggested it was a sustained El Niño weather change that ended the Norte Chico culture and forced them into the hills perhaps becoming and giving rise to the Chavin Civilization. This culture existed, as near as scholars can determine, from 900 to 200 BCE. They began the first metal working and refining of gold and firing their pottery in kilns. One of the Chavin sites at Huantar was just in the news as archaeologists have determined that it like other ancient temples and sites in Malta and Turkey had the ability to alter the human voice as well as certain notes made by horms.  To get to Chavin Huantar is at best a 10 hour drive and can be tiring given bad roads and the desert coast of Peru before you start inland toward the mountains.
We yet hope to visit several sites in Peru and one in Arequipa, but our time now is limited. With the next temple maintenance closing in August, we expect to be with family on the northern coast of California. A site we would yet like to visit is in Colca Canyon of Peru and a site of one of the earliest human habitations known as Mollepunko Cave. Petroglyphs of tamed llamas are on the walls of the cave.  These date to 6,000 BCE.

In Jared Diamond's epoch and Pulitzer Prize winning view of world history in  "Guns, Germs and Steel," he asks why world history should be like an onion? He tries to answer that question in his book peeling back the layers and offers theories that go beyond simple Darwinist or racial stereotyping.  I find his theories and conclusions to be nearly as informative and thought provoking as the writings of Joseph Campbell who teaches us about the rise of common myths and traditions throughout all of human history. Both of these authors have helped me understand Peru's history and its people. I am better able to understand, though I admit I am still coming to terms how a group of 168 organized thugs, otherwise known as the Conquistadores, could defeat the armies of the Incan empire, some quarter of a million men strong. It was about 'guns, germs, and steel,' though mostly it was germs, since most of the ruling elites of the Inca had succumbed to a virgin soil epidemic of smallpox two years before the arrival of the Spanish. At the time of Christopher Columbus' landing in the West Indies scholars estimate the combined indigenous population of the Americas were greater than that of Europe. So, why didn't the Inca or the Aztec or Maya invade Europe? With a little help from Photoshop I have put a descendent of Atahualpa on the balcony of  Buckingham Palace.  No longer are they the Royal Family, but the Imperial Incan Family. God save the Emperor!
Evolutionary biologist Diamond spent more than 30 years researching and studying in New Guinea becoming familiar with the people and their environment. Of these and other peoples he asks, "Why did wealth and power become distributed as they now are, rather than in some other way? For instance, why weren't Native Americans, Africans, and Aboriginal Australians the ones who decimated, subjugated, or exterminated Europeans and Asians?" I have asked those questions as many others who have traveled through Peru and begun to understand its history. Travelers though Mexico and Central America would also ask those same questions.

The Europeans embraced the technology of iron and gunpowder, working metals and materials, to the subjugation of others.  Among the Inca and others in the Americas metal working was for decorative and religious purposes. Their weapons remained fashioned from wood and stone. As the room in Cajamarca was being filled with gold and silver to pay the ransom for Atahualpa's release the Inca could not understand the unquenchable and insatiable desire the Spanish had for gold and precious metals. Though there are ancient iron mines in Peru, as far as any scholar can confirm, there was no working of iron or steel.  The iron ore was used for cosmetics and the dyeing of textiles. An oxide for of iron called hematite/magnetite was used extensively by the Inca and other peoples. Evidence also suggests that meteoric iron and nickel were used in pre-Colombian America. Hematite and its magnetic cousin magnetite are much harder than iron or granite and were used in the shaping of the beautiful construction stones of the Inca Imperial era found in Machu Picchu, Cusco and other sites.
The question arises, and historians will grapple with it for a very long time -- why did the Europeans embrace metal working and iron for the advancement of weaponry and domination in their quest for guns, manufactured items, and steel, while the Inca and others thought of it only in decorative terms?
At the time that Pizarro began his search for more empire to conquer for God, King and his personal fortune he did encounter a heavily laden Incan ship off the coast of Ecuador. It was the discovery of that ship and the captives that he took back to Panama wherein he would learn of the riches of the Inca. Scholars suggest this Incan craft was the size of a Spanish caravelle.  I am uncertain what size of ship that is, but certainly more than the reed boats used on the coasts for fishing. Might they have made Atlantic and Pacific crossings?  The historical evidence suggests such and had been happening for many centuries even thousands of years before the Inca. Peruvian cocaine and tobacco were found in Egyptian mummies dating to 1100 BC. Certainly such transoceanic crossings were made by at least several early peoples.
Professor Diamond suggests the immediate factors that enabled the Europeans to kill and conquer other peoples were indeed guns, infectious diseases, steel tools, and their manufactured products, but they do not provide a complete understanding and do not explain why Native Americans or Africans were the ones not to end up with guns, the nastiest germs and steel? Our trips around Peru to various archaeological sites and accompanying museums define and illustrate the intelligence, creativity, and abilities of the numerous civilizations and cultures here. Cotton was domesticated here and used by the inhabitants of Bandurria and Aspero in weaving textiles and fishing nets  more than 5,000 years ago. The museums are loaded with precious metals skillfully and beautifully made, but never done in the context of the Europeans. Iron was used by at least one group of pre-Hispanic people in Central America, the Olmecs, but did not continue to their successor states.

Also, on my Kindle library waiting to be read is William McNeil's "The Rise of the West." Perhaps Professor McNeil will explain why the West/Europe was able to succeed the earlier states of China, India, the Mongols, and Islam. Therein lies the answer, in the relationship of one state to another as civilization moved from east to west, one building upon the other. In the Americas there was a largely independent development from the retreat of the last ice age to the arrival of the Europeans.  Left alone to develop they would have neither the benefit of Greek thought, Islamic algebra and philosophy and Chinese gunpowder, nor iron from Anatolia post the Bronze Age.

If the Spanish had not arrived when they did would those in the Americas have entered at some point an age of iron and manufacturing? Atahualpa had in mind to capture the Spanish, geld a few to guard his harem, kill the rest of them, but to breed their horses. No one can say if he had any interest in their guns and steel.

Jared Diamond sums up his book with one sentence: "History followed different courses for different peoples because of differences among peoples' environments, not because of biological differences among peoples themselves." Such are the quandaries and questions of an idle mind on a warm Lima Sunday afternoon. The fans are on and the windows are open.

Posted by George at 5:50 PM No comments: 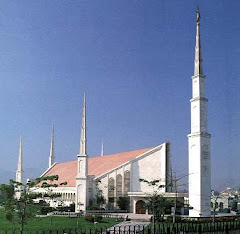